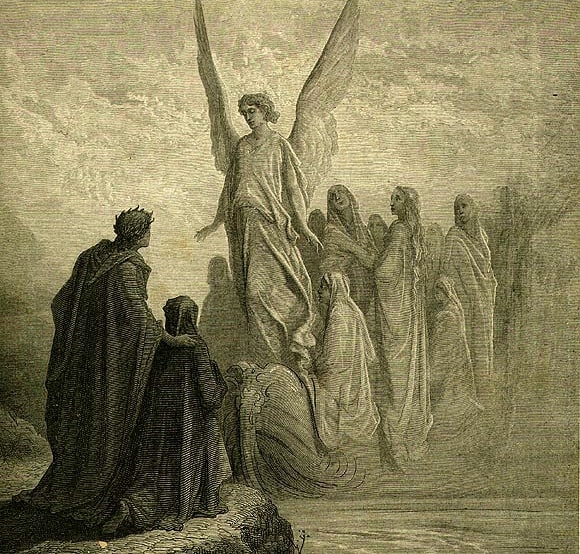 One of the most touching—and, for readers, the most practically useful—features of Dante’s Purgatorio is the emphasis on prayer. As Dante recounts his vision in the second part (or canticle) of his Divine Comedy, the souls he encounters are found always in prayer. Dante most often hears these prayers as communal songs, but in his interviews with the souls he also hears their requests for prayers: requests for Dante’s own prayers, as well as requests that Dante return to Italy and ask the relatives of that particular soul for their prayers as well. To read Purgatorio today can be, for many of us, a sobering reminder of how little praying we do for those we loved once in this earthly life (for clarity’s sake, I will refer to Dante’s poem as Purgatorio and the actual post-mortem status as Purgatory).

The doctrine of Purgatory has its roots in Sacred Scripture—although it is not defined there as explicitly as Heaven and Hell. Scripture gives us hints as to the nature of Purgatory, especially in references to the efficacy of praying for the dead (see 2 Maccabees 12:46) and in the implication that there are sins that can be forgiven in the “age to come” (see Matthew 12:31). From the time of the Maccabees through the early Church to the present day, praying for the souls of the recently deceased has been an important practice. What exactly do we pray for when we pray for these souls?

The dogma of Purgatory, formally declared at the Second Council of Lyons in 1274 and restated at the Councils of Florence (1443) and Trent (1545–1563), is neat and trim: (1) some souls die in the state of grace and love of God but are still in need of purification and (2) our prayers and offerings are of use to them.

Saint John Paul II describes Purgatory as “the process of purification for those who die in the love of God but who are not completely imbued with that love” (General Audience, 4 Aug., 1999). That is to say, individuals who die with unrepented venial sin and those who die before having performed sufficient penance for absolved sins (see CCC 1459–1460), must still “undergo purification, so as to achieve the holiness necessary to enter the joy of heaven” and experiencing communion with God (CCC 1030).

As Dante describes it in the opening lines of Purgatory,

And I shall sing about that second realm
where man’s soul goes to purify itself
and become worthy to ascend to Heaven. (Pg. I.4-6)

The core concept of Purgatory is not punishment for the sake of balancing some sort of accountant’s sin ledger. As then-Cardinal Ratzinger wrote, “Purgatory is not, as Tertullian thought, some kind of supra-worldly concentration camp where man is forced to undergo punishment in a more or less arbitrary fashion. Rather it is the inwardly necessary process of transformation in which a person becomes capable of Christ, capable of God, and thus capable of unity with the whole communion of saints.” (Eschatology: Death and Eternal Life, Catholic University of America Press, 2007, p. 230).

This aspect of Purgatory is what Dante understood instinctively: its essential nature is not moral scorekeeping, but rather the process by which the human soul is freed of its earthly attachments and misdirected desires. The punishments that Dante’s souls endure do not inflict pain aimlessly; Dante’s souls experience corrective purification directed at the particular moral disposition which tripped them up in earthly life. The souls Dante encounters are not condemned to Purgatory, they experience Purgatory up until that moment in which the soul itself recognizes its own purification and, unburdened by sin, naturally rises to its Creator.

Purgatorio is the canticle of friendship. In this aspect too, Dante understood instinctively the nature of Purgatory as communion. As St. John Paul II said in his audience cited above: “Just as in their earthly life believers are united in the one Mystical Body, so after death those who live in a state of purification experience the same ecclesial solidarity which works through prayer, prayers for suffrage and love for their other brothers and sisters in the faith. Purification is lived in the essential bond created between those who live in this world and those who enjoy eternal beatitude” (emphasis mine).

In Dante’s Purgatorio, the souls pray constantly, for each other and for us below (whether or not the souls in actual Purgatory can pray for us has not been defined by the Church). Dante’s poetry of friendship and prayer has a singular effect on its readers (at least, those who take his religious message at all seriously): shifting our prayer life away from praying for our own needs and toward far greater focus on praying for those we loved in this earthly life and look forward to seeing again in communion of saints and in union with God. Early in Purgatorio Dante imagines an encounter on the shores of Purgatory with a friend he had not seen in 20 years, and this friend explains to him, “As I loved you in the flesh, just so do I love you now without it.” And so we pray on All Souls’ Day and throughout the month of November for all those we loved once in the flesh and still love now all the more after their passing.