Hit enter to search or ESC to close
SaintsSpiritual Life 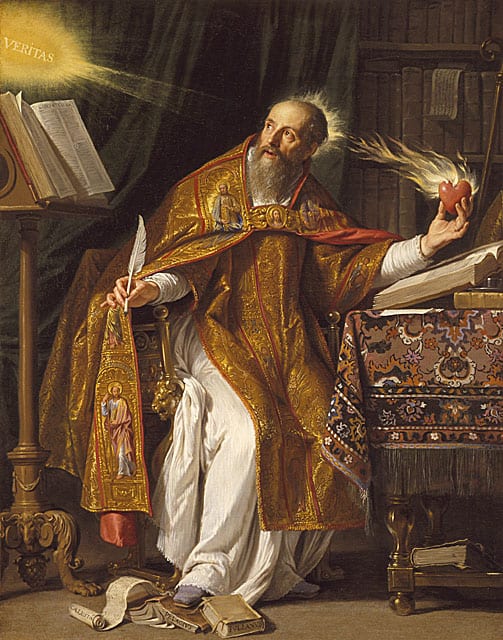 Why read Augustine’s Confessions? What meaning can we find in the story of a dissatisfied life lived 1600 years ago in a culture utterly alien to our own? I won’t say anything about the value of our Catholic patrimony or the value of tradition; anyone swayed by such an argument won’t ask those questions in the first place. To those who do question—or who outright deny—the current relevance of ancient literature, even the greatest of Christian literature, I will give the simplest answer: because Augustine would share your suspicion and go himself in search of reading that provides immediate succor rather than some abstract sense of personal enrichment.

Confessions tells the story of a man who followed the career development path, only to find himself miserable while achieving “success,” and then tried every popular self-help regiment for improving his outlook, only to find them void of any substance. The Confessions begins with a prayer and a reflection, quoted at the end of this post, that declare our hearts “unquiet” until they rest in our Creator. Confessions recounts that unquiet heart that sought in vain for fulfilment until it abandoned its own pretensions and accepted the love of God.

Confessions will take you places you didn’t necessarily want to go. Augustine experienced what might be called a dark 20 years of the soul. What makes the Confessions so significant is Augustine’s disarming honesty. He doesn’t tell us that he was lost for 20 years and then saw the light and his life was easily reformed and set in order. His conversion is not sinner-turned-saint in a miraculous instant. Augustine wrestled with temptation sincerely: just as St. Paul wrote, “For I do not understand my own actions. For I do not do what I want, but I do the very thing I hate” (Romans 7:15), Augustine didn’t freely give himself over to sin, he hated his choices and came to hate himself for continually making what he knew were the wrong choices. He recognized that he had fallen in love with his own destruction—the sad realization of every lost soul today who self-sabotages through every manner of addiction.

For Augustine, sin is our refusal of God in a misguided attempt to provide for our own happiness. And this is where the Confessions remains an essential reading. The greatest similarity between our world and Augustine’s is the secular belief in absolute individual autonomy. Augustine was pushed into education as a way of ascending a meritocratic ladder. His career path is shockingly similar to today’s ideal: striving at early education, winning awards, besting classmates in academic competitions, aiming always to “win”—not necessarily to learn, certainly not to discover truth—in order to earn a shot at better schools and ultimately to the halls of power.

Grammar school to rhetoric school, to teaching at increasingly more prestigious places until finally being appointed to the imperial rhetoric school in Milan, Augustine describes the arc of his educational career with its constant pressure to achieve and the psychological damage it inflicts on all. Augustine had achieved the greatest success on the secular path, teaching in the imperial school, and yet what should have been a moment of fulfillment showed him only the hollowness of the goal itself. He includes the conversion story of a high-ranking official in the company of the emperor, who converted after reading the story of St. Anthony and comparing the relative “offers” of Christianity and secular success, “Tell me: where do we hope all our efforts are going to get us? What are we looking for? In whose cause are we striving? Does life at court promise us anything better than promotion to being friends of the emperor”? And once we are, will that not be a precarious position, fraught with perils? Will it not mean negotiating many a hazard, only to end in greater danger still? And how long would it take us to get there? Whereas I can become a friend of God here and now if I want to.” We might note that even this doesn’t go quite far enough—even if the convert were to somehow be appointed emperor, the long list of assassinated Roman emperors would guarantee him restless nights. But to be a friend of God requires only genuine commitment—though real spiritual commitment itself might be more difficult than an entire career geared towards advancement.

How do we today straddle the two divergent paths of devotion and secular career? Is there any among us who has not experienced the same cycle of expectation and disappointment—let us strive to achieve in our current setting to ensure advancement to a better setting, with the understanding that eventually all this work will pay off when our dreams are finally realized, only to discover that the realization of that dream has only invited a new set of fears and disappointments and done nothing to heal the harm we have done to ourselves on this journey? Confessions extends the consolation of shared experience to us and provides the answer, one we accept not because of a subtle theological argument, but because we recognize in our own hearts the same “unquiet” that Augustine felt and for which he finally found the natural cure:

Great are you, O Lord, and exceedingly worthy of praise; your power is immense, and your wisdom beyond reckoning. And so we humans, who are a due part of your creation, long to praise you—we who carry our mortality about with us, carry the evidence of our sin and with it the proof that you thwart the proud. Yet these humans, due part of your creation as they are, still do long to praise you. You stir us so that praising you may bring us joy, because you have made us and drawn us to yourself, and our heart is unquiet until it rests in you.