Hit enter to search or ESC to close
HistoryLiturgical Year

Relic of the Resurrection: The Authenticity of the Shroud of Turin 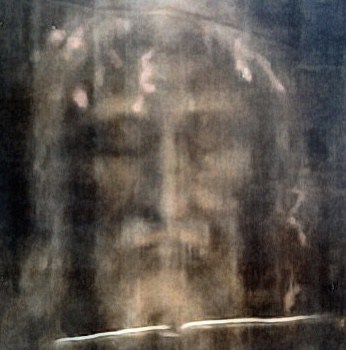 Image: Negative of the Shroud of Turin (detail) by Dianelos Georgoudis [CC BY-SA 3.0]

In elementary school, I remember watching an episode of Unsolved Mysteries on the Shroud of Turin. They announced the results of the carbon dating testing that seemed to point to the burial cloth as a medieval fake (dating to the period of 1260–1390 AD). Even as a non-practicing Catholic—and a young kid—I was not convinced by the testing. The image clearly is not a painting and we can’t even say how it was made. How does it have the qualities of a photographic negative before anyone knew of that technology? Why is there no paint on it? It just didn’t add up.

Relic of the Resurrection

It was a great grace to be able to make a virtual pilgrimage to the Shroud on Holy Saturday. My video stalled while panning over Christ’s face. It was a great moment of prayer: “Restore us, O God; let thy face shine, that we may be saved!” (Psalm 80:3). It was a day to be with Christ in the tomb and we generally relate the Shroud to Christ’s suffering. It was, however, the great relic of the Resurrection, produced, most likely, by light shining from the Risen Christ, and it led the Peter and John to belief!

We see this in one of the possible Gospel readings for Easter Sunday, as it describes how Peter and John found the empty tomb. It also describes the first sight of Jesus’ burial shroud:

The cloths must have been amazing if they caused John to believe in the Resurrection!

Since the carbon dating, a lot more research has been done, almost all of which point to the Shroud’s authenticity. In my own reading, I’ve been in debt to Dr. John Jackson, who runs the Turin Shroud Research Center in Colorado Springs. A recently updated book by Dr. Jackson, The Shroud of Turin: A Critical Summary of Observations, Data, and Hypotheses (CMJ Marian Publishers 2017, also available online) provides an overview of where research on the Shroud stands today. The book traces the Shroud’s history from Jerusalem to Antioch, and then on to Cilicia, Constantinople, Lirey in France, and finally to Turin. All along this journey, it has been used as the basis to create Christian iconography, further strengthening its ancient provenance.

There is much evidence linked to the Passion, including real blood (both pre and postmortem), which has recently been shown to be from a torture victim. It is faithful to Jewish burial practices, as well as the Roman method of crucifixion. As such, it does not match medieval imagery of the crucifixion, which portray nails in Jesus’ hands and feet. Rather, the Shroud shows nail marks in the wrist and ankles, in accord with archeological evidence of Roman crucifixion. Its blood stains also match up with another relic of the burial, the Sudarium of Oviedo—the head cloth used to cover Jesus after the crucifixion and in burial. There is documentation establishing that the Sudarium was brought to Spain after the Persian invasion of Syria in the seventh century. The Shroud also contains evidence of dirt on Jesus’ feet, knees, and nose (that matches dirt from Jerusalem) as well as pollen from the area and right time of year, and even the outline of flowers laid upon it in the tomb.

Evidence of the Passion, Image of the Resurrection

But the image on the Shroud is not one of the dead Christ. It captures the moment of the Resurrection, which created this image through its light and radiation. It clearly was not painted, as the image rests only the very top of the linen threads and no paint materials soaked into the threads. It was discovered in the late 1800s that the Shroud has the qualities of a photographic negative, which is why a negative of it produces a clearer image. The image also has three dimensional qualities. All of this points toward radiation and light as the source of the image. Just as it led the two apostles to believe, so it stands as a lasting testimony not just to Jesus’ death and burial, but to the power of his Resurrected life.

The Shroud provides an incredible access point to learn more about our Lord’s Passion, burial, and Resurrection. It has an amazing history, made only more intriguing by new scientific methods, many of which have explained the problems with carbon dating. It also gives us a unique glimpse at the likely appearance of Jesus. As such, it can strengthen our faith and prayer, as well, as we say: “The Lord is truly risen!”