Between Pledge and Promise – Part II 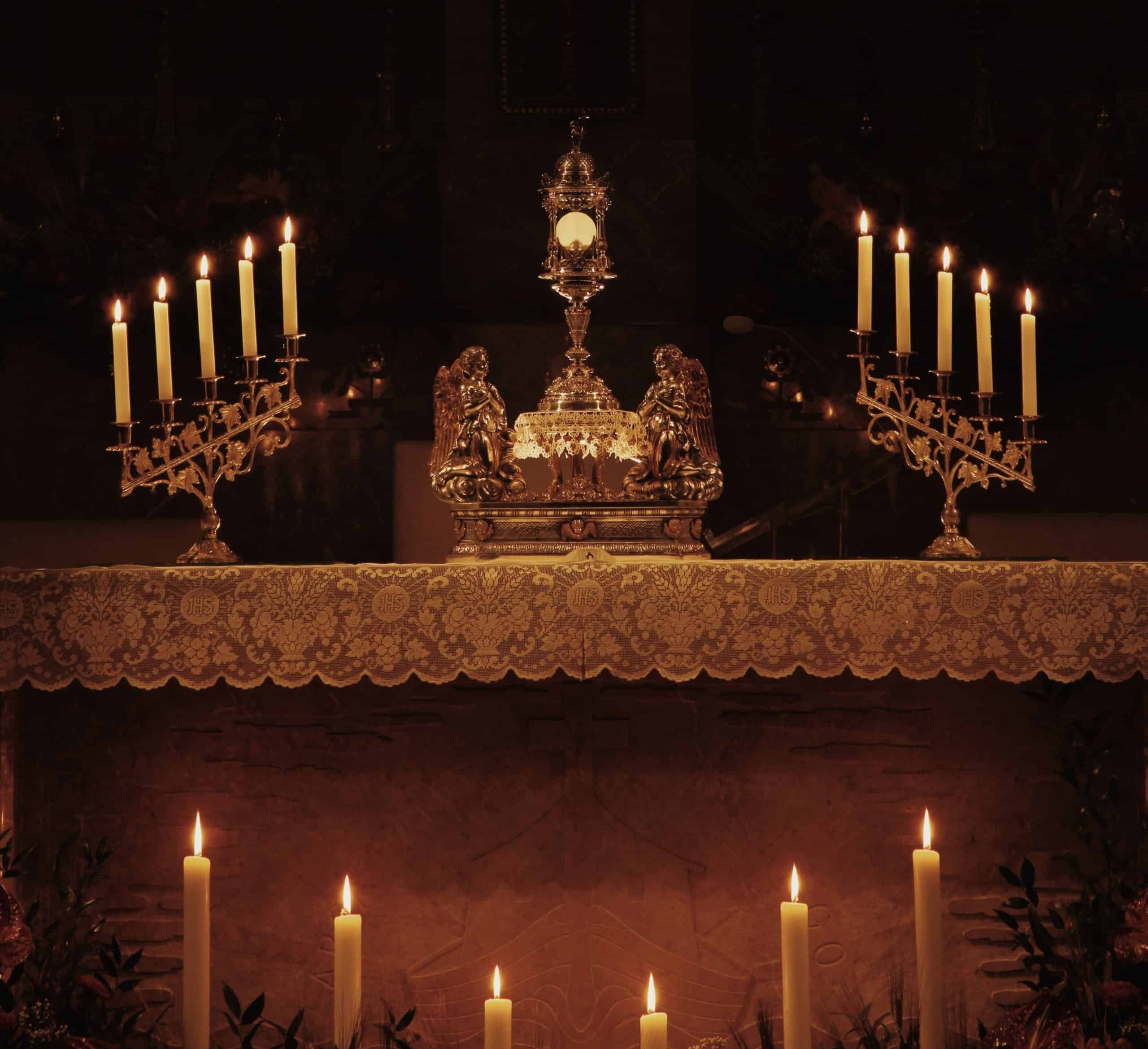 Last time we spoke of the Eucharist as “God Present” to His people. He is present in a wonderful and humble way in every tabernacle of the world. What was left to explore was the “Divine Romance” aspect of the Eucharist. In exploring this aspect we learn something as to why Jesus chooses to humble Himself to be present in the Eucharist. This is what is meant by the Divine Romance, and this Romance finds itself firmly rooted between a Pledge and a Promise.

The Catechism of the Catholic Church in paragraph 1337, when speaking about the Eucharist, teaches that,

“In order to leave them a pledge of His love, in order never to depart from his own and to make them sharers in his Passover, he instituted the Eucharist as the memorial of his death and Resurrection.”

This is perhaps the most telling and, dare it be said, the most romantic line in the entire Catechism.

It speaks of God, the Divine Lover, being absolutely spurned by and yet absolutely smitten with his beloved. Recall that humankind rejected God’s divine advances from practically the very beginning. In their rejection of Him, they also made a mess of the wedding dowry that He offered them. That is to say, the world fell with their defiant “NO!”

Nevertheless, God sends his only Son into this fallen mess to redeem the beloved and reinstitute the wedding proposal given to our first parents. Some said “yes,” many others said “no,” and still others said, “not yet,” or “not completely.” Jesus, however, like His Father, is so smitten with the beloved’s beauty that even despite his Ascension He cannot bear to be away from his beloved.

So what does He do? “In order never to depart from his own,” He pledges to remain (CCC 1337). He gives us the Eucharist. He acts like an impetuous teenager who sits anxiously by the phone hoping his beloved will return His call. No, it is better than that. He is like the Divine Romeo who awaits a glimpse and then perhaps an encounter with his beloved Juliet. After all, what lover would prefer a telephone call to a face to face, flesh to flesh, heart to heart encounter?

He is head over heels in love with us, and so He pledges never to go away. He makes Himself radically available to us. His heart and his soul, his flesh and his blood are available to us in the Eucharist. Always. This is His pledge.

What of the promise?

As mentioned above, some respond to this pledge and give themselves wholly and entirely to the Lover. Others do not. Still others only give themselves in stages or in increments. Even those who give themselves over to this Divine Romance quickly find that the Lover is so much the better lover than the beloved is currently capable of being. This realization can lead to a certain despondency on behalf of the beloved.

To keep the beloved from despairing, however, the Lover adds a promise to His pledge. Essentially, the Lover says, “I understand your limits. I will not hold them against you. I promise to make all things new, including your ability to love me with a pure and virginal (undivided) love. I love who you are now and I am patient enough to await who you will become.” The Catechism puts it this way in paragraph 1402,

“If the Eucharist is the memorial of the Passover of the Lord Jesus, if by our communion at the altar we are filled ‘with every heavenly blessing and grace,’ then the Eucharist is also an anticipation of the heavenly glory.”

Ahh, heavenly glory! In order to love the Lover in the way the Lover truly deserves, and in a way the beloved truly wants to love, the beloved will need the very special grace of Heavenly Glory. Part of being in Heavenly Glory is to become like God so we can love like God. This is something known as “divinization”—and that is a discussion for another time. For now it is enough to remember that we, his beloved, are not abandoned in the hopeless despair between a rock and a hard place. Rather, we find ourselves in the hope-filled space between a Pledge and a Promise. That makes all the difference in the world—both this world and the next.