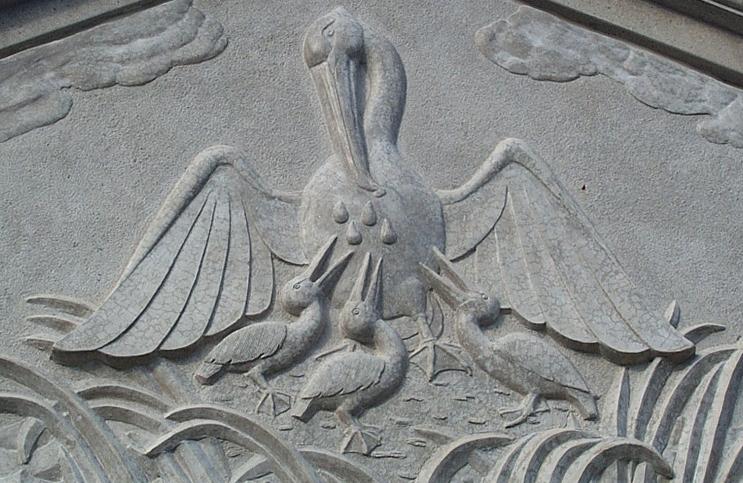 This is the second post in a series on suffering. You can read the first installment here.

In medieval times, one of the favorite images of Christ (and subsequently his Holy Church) was the pelican. A belief arose that in times when food was scarce, the pelican mother would do something quite unusual to support her brood or young to keep them from dying. The mother would tear into her chest with her beak and feed her chicks her own blood so that they might live. This story about the pelican so resembled our Lord’s death on the cross that medieval artists began using pelicans to symbolize the self-giving sacrifice Christ offers on the cross where his blood flows from his side for our consumption so that we might have life (see John 6:53, 19:34).

This image of the pelican helps to explain the very ancient concept of sacrifice. In the previous post on God’s response to the problem of suffering we saw that the unifying theme of this response is self-sacrificial love. Jesus lives out this love for us as the Suffering Servant in his life, death, and resurrection. He invites us to enter into and imitate this perfect love as we join our suffering to his. This understanding of self-sacrificial love flows out of everything God teaches us about sacrifice throughout the Old Testament.

The lessons on sacrifice start as soon as sin and suffering entering the story: with Adam and Eve’s disobedience in the Garden of Eden. Thomas Aquinas tells us that the start of sin and suffering and man’s departure from God was pride (see STh., II–II q.162 a.7 obj. 5).

“The beginning of man’s pride is to depart from the Lord; his heart has forsaken his Maker. For the beginning of pride is sin, and the man who clings to it pours out abominations.” (Sirach 10:12–13)

Pride is a disordered elevation of one’s self, it is a form of idolatry where one puts love of self over love of God and love of others. It is this self-centeredness that wounded our relationship with God in the Fall and causes every other woundedness that follows—including death itself.

Reversing the Sin of Pride

It is no surprise then that the remedy to man’s sin and the suffering and death that go along with it would be a complete reversal of the sin of pride. The antidote to self-centeredness is the sacrifice of one’s self, becoming humble. After the Fall we immediately see God informing Adam and Eve that sacrifice would be the means by which He would bring healing to the gaping wound pride had caused. He gives the solution to this problem in Genesis 3:15 with the promise that the Seed of the Woman would crush the head of the serpent, but he would also suffer a death to achieve this victory for us (the striking of the heel).

Another effect of the Fall was that Adam and Eve knew that they were naked and were ashamed, and they tried to hide from God—trying to hide their own nakedness or even their sinfulness (Genesis 3:7, 10). Hiding sin from God, or trying to handle it ourselves, never works. Sin and suffering still remain. But when God finds Adam and Eve we see a further clue to the solution of sin: it would require a sacrifice that only God could accomplish. Genesis 3:21 tells us that God made for Adam and Eve garments of skins and clothed them. This covering of their nakedness required the death of animals. We later learn in Hebrews 9:22 that there was no forgiveness of sin without the shedding of blood—in other words, no forgiveness without sacrifice. So, in the Garden of Eden we see the foreshadowing of the remedy for sin: sacrifice.

Obedience: The Root of Sacrifice

The sacrifice of animals throughout the Old Testament was insufficient to satisfy the debt of sin incurred by mortal man against an immortal God, but it taught God’s people about sacrifice. God later reveals that what He really wants is not the animals but the root of sacrifice. We learn in numerous places that the root of sacrifice is obedience, a broken spirit, and a contrite heart (see, for example, 1 Samuel 15:22 and Psalm 51:16–17).

In obedience, one gives one’s whole self back to God completely. Sacrifice is a surrendering of one’s own will for the will of God. Obedience and the sacrifice of one’s self for God and neighbor will bring about the reversal of the fall of man and a reunification with God. This kind of perfect sacrifice cannot be done by man alone, but only with the help of God—specifically only by God who became man, Jesus. We hear this explicitly in Philippians 2:4–8:

“Let each of you look not only to his own interests, but also to the interest of others. Have this mind among yourselves, which was in Christ Jesus, who, though he was in the form of God, did not count equality with God a thing to be grasped, but emptied himself, taking the form of a servant, being born in the likeness of men. And being found in human form he humbled himself and became obedient unto death, even death on a cross.”

Paul makes it clear that we must live in imitation of Christ—totally obedient, even to death on the cross, giving ourselves completely to the will of the Father.

In his response to suffering, God has willed that we also share a role in its reversal. We must follow Christ in humbling ourselves to love others and God, sacrificing our pride and putting them before ourselves. Like the image of the pelican tearing open her breast to feed her young, we must love as Christ has loved us, emptying ourselves for the good of others.