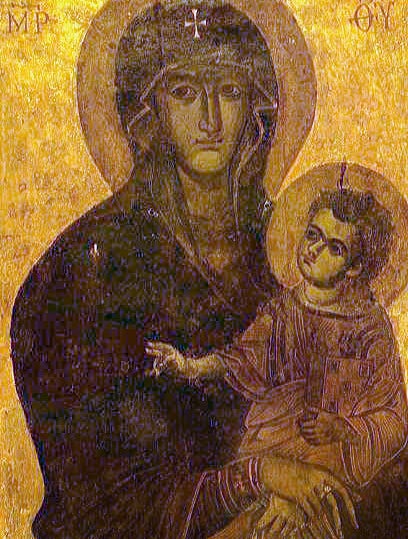 On March 15, Pope Francis made a mini pilgrimage through the city of Rome, stopping at two sites associated with prayers for relief from pestilence.

The first stop was San Marcello in Corso, a baroque church in Via del Corso, the fashionable street running south from the Piazza di Spagna with the Piazza Venezia. It contains a miraculous crucifix that was carried in procession through the districts of Rome during an outbreak of plague in 1522. This crucifix was brought to the Vatican for the March 27th Urbi et Orbi blessing and remained in St. Peter’s during Holy Week.

Protectress of the Roman People

The other stop on the pope’s pilgrimage was Santa Maria Maggiore (St. Mary Major—indulge me if I refer to it in the Italian, which sounds so much better), a fifth-century basilica which houses the Salus Populi Romani (Protectress of the Roman People). This sixth-century icon was likewise present at the Urbi et Orbi blessing and Holy Week services at St. Peter’s. Pope Francis has a deep connection to this icon: he prayed before it the day after his election as pontiff and returns to it before and after every foreign trip. Tradition has it that St. Luke himself painted the icon and St. Helen, mother of Constantine the Great, found it in Jerusalem in the fourth century.

The icon is related to a type known as the Hodegetria (“she who points the way”). In this style of icon the Virgin holds the Christ child, whose divinity is indicated by the cross-inscribed nimbus—the flat disk behind the head, as opposed to a halo, which is typically a ring depicted above the head. Typically, a Madonna Hodegetria points to Christ with her right hand, but the Protectress of the Roman People holds Christ securely with both hands. The writing at the top is an abbreviation of “Mother of God” (Greek Meter Theou). Art historians believe the current image was “restored” in the thirteenth century; the original image was probably fading and was therefore overpainted.

In 1838 Gregory XVI crowned the image on the Feast of the Assumption, and in 1954 Pius XII initiated the first Marian Year with a procession of the icon through the streets of Rome. Pope Francis ordered the restoration of the image in 2018, restoring the image to its original simplicity after centuries of accretion including crowns and gemstone. But the icon’s place in Rome dates back much further, to an age of plague and death.

Gregory the Great and the Plague of 590

Like many of the greatest popes, Pope St. Gregory the Great became pontiff in a time of suffering and distress. In November 589 the Tiber River overflowed its banks, decimating grain storages, washing away buildings, and apparently resulting in the city being overrun with snakes (and at least one sea monster, according to the chronicles). Two months later, in January 590, plague reappeared in the city. This outbreak of bubonic plague was an “aftershock” of the Plague of Justinian which ravaged Europe and the Middle East from 541-542. The Plague of Justinian, so-named because it occurred during the reign of Eastern Roman Emperor Justinian (527-565), was the first plague pandemic, killing as many as 25 million worldwide. Our primary source, Justinian’s secretary and biographer Procopius, tells us that in Constantinople 5,000 people died per day for four months, with the height of the plague killing 10,000 daily.

As would happen later with the Black Death (1347-1351), bubonic plague returned periodically for the next 200 years; AD 590 was one of these aftershocks. The Church of Rome, reeling from the devastating flood and presumably on the verge of famine with the loss of its grain storage, now suffered the horrifying effects of plague. The bodies piled up fast. In some cases victims died within hours of showing symptoms.

One of the first victims in Rome was Pope Pelagius II. In his place, the Roman people elected by acclamation St. Gregory the Great, a man of tremendous (and tremendously varied) abilities, who melded a profound, contemplative prayer life with an extraordinary talent for administration. He had previously served as prefect of Rome (a secular office charged with the protection of the city), had served Pope Pelagius II as ambassador to the imperial court in Constantinople, and had founded seven monasteries. At the time of his election, he was the abbot of one of these monasteries and sought to avoid taking on a role that would extract him from his monastic life.

A Procession and a Prayer

But Gregory had the humility to accept that in this case God was calling him out of his monastery to serve all of Rome and the Church. One of Gregory’s first acts was to lead a penitential procession through the streets of Rome to Santa Maria Maggiore. For this procession, Gregory had Salus Populi Romani brought to Rome and he and the Romans prayed for the Blessed Virgin’s intercession.

Our source, Gregory of Tours, tells us that the plague was so severe that 80 participants died during the procession itself. After the procession reached Santa Maria Maggiore, it turned toward the Vatican. On the banks of the Tiber, Gregory saw Michael the Archangel atop the ancient Mausoleum of Hadrian with a flaming sword raised high, which the archangel then sheathed, signifying the end of the plague. The former mausoleum was renamed Castel Sant’Angelo, which visitors to Rome will recognize as the cylindrical fortress guarding the Vatican side of the Tiber.

So much of Roman church history is tied to this procession: the transformation of a Roman pagan tomb into the fortress of Michael the Archangel, the devotion to Mary as special protectress in time of pestilence and the miracle of the plague’s end.

We do not know exactly which prayers Pope St. Gregory the Great and the Romans said, but a very good candidate would be the prayer Pope Francis offered in celebration of the restoration of Protectress of the Roman People, the most ancient Marian hymn we have proclaiming Mary as Mother God, a prayer of supplication in times of suffering dating from the 3rd century—Sub tuum praesidium:

We fly to Thy protection,
O Holy Mother of God;
Do not despise our petitions
in our necessities,
but deliver us always
from all dangers,
O Glorious and Blessed Virgin. Amen.