Consecrated Life in the Old Testament

By Chris Lanciotti January 31, 2020 No Comments 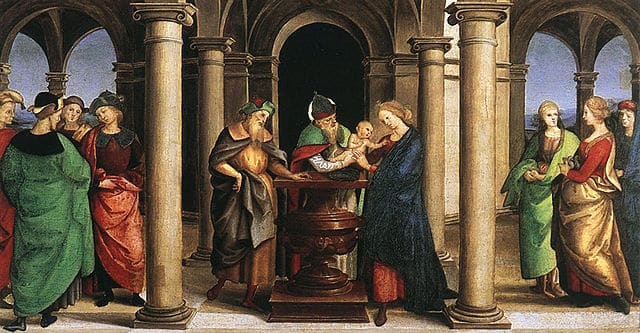 Image: The Presentation in the Temple, Raphael [public domain]

Each February 2nd the Church celebrates the Presentation of the Lord in the Temple, commemorating that extraordinary event from the Gospel of Luke where Joseph and Mary bring their firstborn son to the Temple in fulfillment of the Mosaic Law. The Church has celebrated this incredible event in the liturgy at least since the 4th century. The feast has garnered the additional title of “Candlemas” (think “Candle-mass” like “Christ-mass”) due to the blessing of candles that has occurred as part of the same liturgy since the 11th century (read more about the history of the feast here).

As if that were not enough, on February 2nd, 1997, Pope Saint John Paul II instituted the Presentation as an International Day of Prayer for Men and Women living the Consecrated Vocation. Too much to remember? While it may seem sometimes that Catholic feast days pile up more titles and traditions than toppings on your frozen yogurt, let’s examine why relating the Presentation of the Lord to the Consecrated Vocation makes so much sense.

To begin, it is important to examine the roots of the consecrated vocation in the Catholic tradition.

Nearly every time I have to drive more than thirty minutes (which is quite often because I enjoy frequent visits to the nearby mountains) I put on a lecture by Dr. Brant Pitre (professor of Scripture at the Notre Dame Seminary in New Orleans and at the Augustine Institute) who has become renowned in Catholic circles for his “Jewish Roots” books. Dr. Pitre both in word and print artfully weaves together the relationship between the Catholic and Jewish traditions, unfolding for Catholics many of the Church practices that puzzle the faithful today. To paraphrase his common refrain: “If you find something weird in the Catholic Church, look for where it comes from in Jewish tradition.”

Following this same understanding, Saint Augustine wrote “In the Old Testament the New is concealed, in the New the Old is revealed,” a phrase that found its way into one of the first documents of the Second Vatican Council (Dei Verbum, paragraph 16). Let’s see how this principle applies to the consecrated vocation.

The word “consecrated” simply means “set apart.” From the same root we also get the word “sacred,” which we apply not only to people but also to places and things that are “set apart” for a special religious purpose. Throughout the Old Testament we see that God intended for the entire nation of Israel to be set apart—to be his chosen people—as we hear in Exodus: “Now therefore, if you will obey my voice and keep my covenant, you shall be my own possession among all peoples; for all the earth is mine, and you shall be to me a kingdom of priests and a holy nation” (Exodus 19:5–6a).

From the beginning God desired the entirety of the Israelite nation to be priests, to be a holy nation, a people set apart as “a light to the Gentiles” (Isaiah 42:6). But the Israelites quickly lost their “direct access” to God’s holiness (the Golden Calf episode in Exodus 32), and as a result God instituted the Levitical priesthood to mediate covenant holiness through sacrifice and example.

The result was that while all Israelites desired to be close to the holiness of God (represented in the Temple by the Holy of Holies), only the priests and specifically the High Priests were allowed to physically draw near to the Lord and petition the Lord to bestow his mercy and holiness on the people. The priests both performed and represented the holiness—the sacredness or “set-apartness”—that God desired for his people. They were “consecrated” for the purpose of drawing close to him and worshipping him in the most intimate way, and they were meant to be a true example to the rest of Israel of what God desired for each one of them.

As a second example of the holiness that God desired for his people, God revealed to Moses that any Israelite (they did not have to be a priest) could make a Nazarite vow, outlined in Numbers chapter six. The Nazirites had to follow a set of stipulations that would “set them apart,” including avoiding alcohol, allowing their hair to grow long, and offering special sacrifices for their consecration.

The most well-known example of the Nazirites in the Old Testament is probably the judge Samson, who is remembered for the great gift of strength that God bestowed upon him as the result of his faithfulness to his Nazirite vow (this well-known story in Judges 13–16 also includes the consequences Samson suffered for forsaking his Nazarite vow by drinking wine, touching an animal carcass, and allowing the Philistine prostitute Delilah to cut his hair).

A light for revelation

Maybe you can already see the parallels here between consecration, the Jewish traditions, and the Catholic Church’s practice of consecration. You might even be tempted to make a direct correlation between the Levitical priesthood and the Catholic priesthood, the religious life and the Nazirites, thinking that the Jewish tradition has simply passed into the Catholic. Surely there is a correlation here, and as we learn throughout salvation history we know that God reveals in stages in preparation for his definitive Revelation (see CCC 53).

There is a key difference though: the fullness of God’s Revelation which we find in the Church is not just a fulfilled or perfected Judaism, but the Person of Jesus Christ. This fact is essential for understanding the special vocation of consecration within the Catholic Church. As with all things in the Christian tradition, it is Christ that gives our worship, our teaching, and our action its distinctive character.

And so it is fitting that on the feast of the Presentation, when Christ the light to the Gentiles and the glory for Israel (see Luke 2:32) was brought to the Temple and “set apart to the Lord” because he was a first-born son (according to the law in Exodus 13:11–16), we pray in a particular way for men and women who are living the consecrated vocation, set apart in a particular way for the service and glory of God.

Originally from Fort Collins, Colorado, Chris attended Regis University in Denver from 2005-2009, where he obtained a B.S. in Biochemistry. In 2009 he moved to Lima, Peru, to join the Sodalitium Christianae Vitae, a consecrated lay community within the Catholic Church. In 2014 Chris returned to Denver as a member of the community and began studying for his M.A. in Theology at the Augustine Institute, graduating in 2017. Since 2017 Chris has taught as an Instructor for the Denver Catechetical School part-time while also continuing to lead frequent mission trips around Latin America through the non-profit Creatio, Inc.