From Paradise Then to Paradise Now 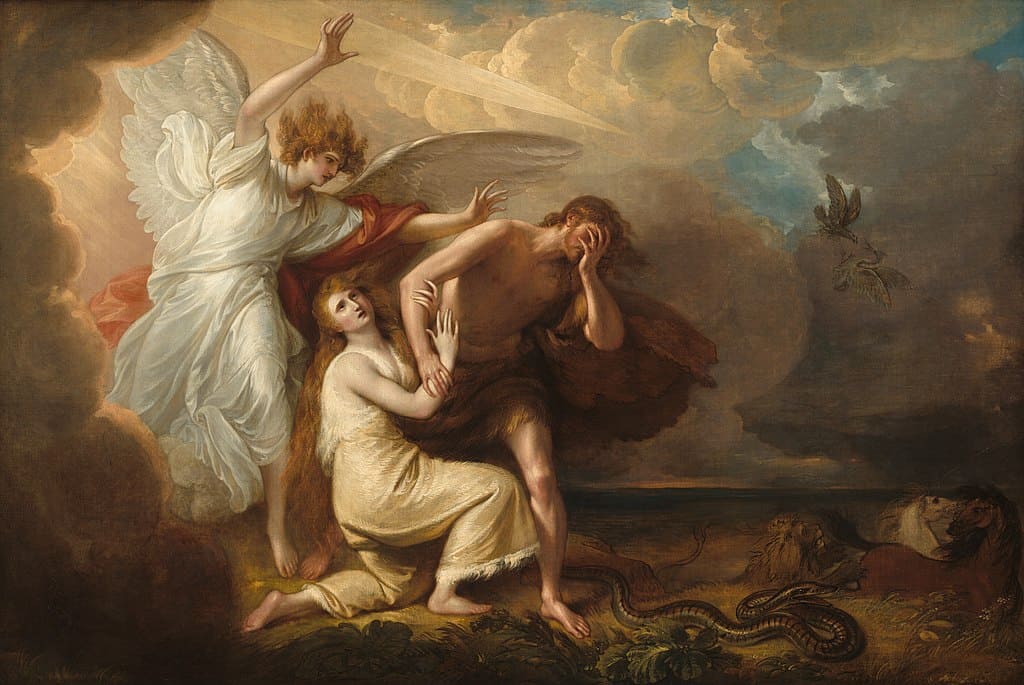 Image: The Expulsion of Adam and Eve from Paradise, Benjamin West [public domain]

While not all may know about the story of the Fall of Man, and while not all may understand the story of the Fall of Man, nonetheless all can tell as well as the man next to him that something isn’t quite right with the world. Pick up the newspaper, open up your computer, turn on your smartphone, and you seem to see nothing but destruction and despair.

Students at the Biblical School are often surprised as they study the Old Testament to find that it seems to be no different in Scripture. But shouldn’t the Bible look and sound different from the newspaper and computer and smartphone, they ask? To which we answer…certainly not, if the Bible is telling the story of salvation history, which is the story of man needing to be saved!

As we repeat in our Biblical School classes, “sin begets sin.” And so we see, immediately upon exile from Eden, that the human race spirals out of control into endless cycles of chaos. Cain murders his brother Abel. Noah’s Flood brings destruction; the Tower of Babel, division. The patriarch Abraham has sons, grandsons, and great-grandsons who war with one another. The patriarch Joseph saves his family Israel from famine, but his people end up oppressed and enslaved in Egypt by a new Pharoah.

Moses liberates Israel from Egypt in the Exodus with the Ten Plagues and parting of the Red Sea, only for the apostasy of worshipping the Golden Calf to follow. The Israelites refuse to enter the Promised Land and instead wander the wilderness for 40 years, during which they turn away from God over and over again. Even when the Israelites do enter the Promised Land, they end up living no differently from the pagans before and beside them. The people reject God as their king, which leads to the institution of the Davidic Kingdom.

But even then, the greatest of all the kings, King David, falls to adultery and partaking in murder. The Davidic Kingdom splits into two, the Northern Kingdom of Israel going into exile at the hands of the Assyrians in 722 BC and the Southern Kingdom of Judah going into exile at the hands of the Babylonians in 586 BC, with Jerusalem and the Temple destroyed. The Jews return from exile, but never have it the same as before, always living under foreign rule. This eventually leads to the Maccabean revolt against their Greek persecutors one and a half centuries before the coming of Christ.

Reading all of this in the Old Testament can leave one aghast at what seems like a never-ending spiral into depravity once sin has entered the world (and to think…you study all this in just the first year of the Biblical School!). No sin remains uncommitted, either: from idolatry to child sacrifice to religious ritualism to the oppression of the poor to murder to adultery, God’s people and the pagans indulge it all.

But why is there such a shocking descent into sin, a tide that cannot seem to be reversed in the Old Testament? Precisely because sin is an offense against God, which man therefore cannot atone for. After all, how is the creature supposed to appease the justice of the Creator? How is the finite ever supposed to “balance out” the scales of justice of the Infinite? When man commits sin, he incurs a debt towards a God, a debt that he cannot pay off.

We already owe God everything that we are for His having created us. But now, we have additionally committed, in Adam, an offense against God by rejecting His law, plus whatever other personal sins we have committed. Thus, we have rejected God’s supernatural life within us by grace and we are thereafter in debt to Him.

It’s like the gambling addict that continues to “double down,” only to continue to lose more and more money. For man can neither atone for his own sin, nor the sins of others, and is therefore left stuck in the mud with nowhere to go but further and further down. This is why St. Paul speaks of the time of the Old Testament as a time of enslavement, specifically enslavement to Satan, sin, and death. Hence, man needs a savior…precisely because there is something that he needs to be saved from!

Next week we will look at the rest of the story—the promise and fulfillment of that savior.