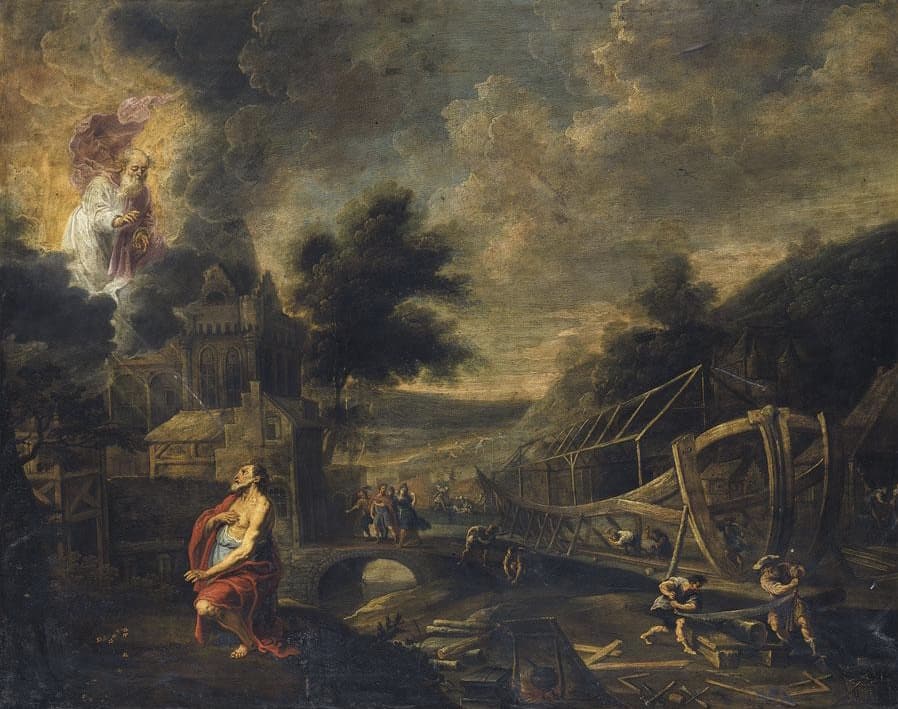 “For behold, I will bring a flood of waters upon the earth, to destroy all flesh in which is the breath of life from under heaven; everything that is on the earth shall die.” —Genesis 6:17

God speaks these words to Noah regarding the dire plight of humanity. Other than Noah, his wife, their three sons and their respective wives (a grand total of eight people), humanity had descended into utter depravity. The force of the testimony of Genesis is shocking: “The Lord saw that the wickedness of man was great in the earth, and that every imagination of the thoughts of his heart was only evil continually” (Genesis 6:5). This is the result when a society begins to fixate on its own name and glory (Genesis 4:17), sexual immorality (Genesis 4:19), entertainment (Genesis 4:21), technology (Genesis 4:22), and excessive violence (Genesis 4:23–24) as Cain’s descendants did. It is a stark contrast to Adam’s descendants through his third son, Seth, who “began to call upon the name of the Lord” (Genesis 4:26). It is the intermarriage of these two lines which results in the wholesale corruption of humanity (see Genesis 6:1–2).

It is precisely because God is a covenantal God that he acts in such a drastic fashion. God acts to preserve his covenant family. What would have happened to the faithful remnant we find in Noah and his family without God’s intervention of the flood? While speculative, it is reasonable to conclude that one way or another the surrounding culture would have destroyed them—either they would have capitulated to the evil around them or they would have become its victims.

God preserves those who are faithful to his covenant, but he also does not immediately abandon even those who have turned away from him.

The threat of the flood is a last-ditch “shout” to grab humanity’s attention. God is trying to awaken the consciences of those who have fallen into such a sinful state. Saint Ignatius of Loyola elaborates on this method in his first rule of the Discernment of Spirits:

“In the persons who go from mortal sin to mortal sin… the good spirit uses the… method [of] pricking them and biting their consciences through the process of reason.”

There are two main points that indicate that God wants to turn his people around toward him before they meet their just judgment. First, we hear that God gives a timeframe for the flood: “My spirit shall not abide in man for ever, for he is flesh, but his days shall be a hundred and twenty years” (Genesis 6:3). At first glance, this may appear to be a declaration that people will no longer live to the incredible ages of Noah’s predecessors like Adam, who lived to be 930, or Seth, who died at the age of 912 (see Genesis 5). However, this seems unlikely because we see examples of individuals after the flood who live beyond 120, such as Sarah who died at 127 (Genesis 23:1) or Abraham who died at 175 (Genesis 25:7) or Isaac who died at 180 (Genesis 35:29).

The other explanation is that God, in commanding Noah to build the ark, gives him 120 years in which to complete it. This makes sense if we consider that there would only be eight people working on it, and that they would have to construct the ark in addition to the rest of their other day-to-day tasks. This timeframe therefore gives the rest of the people the chance to repent and turn back to God. (See pages 63–64 of Victor Hamilton’s Handbook on the Pentateuch [Baker Academic, 2005] for further discussion.)

The second point flows from the first. If Noah is working on this massive project for 120 years, he most certainly did not do so in secret. Rather, in his obedience to God’s command, Noah served as a prophet for his day and age. Day-in and day-out for 120 years, people would have observed him building the ark and making other preparations. If not explicitly recorded in Scripture, the message of Noah is still clear: “A flood is coming, you have to get on the boat.” A drastic shout from God indeed.

The flood demonstrates for us that the “wages of sin is death” (Romans 6:23), but we also see that God wants to preserve as many as he can from this death. However, he doesn’t force anyone to get on the boat. Because life on the boat means turning away from the prior life of depravity and living according to the covenant.

In Noah’s obedience, he bore witness to his neighbors and invited them to repent and be saved. His actions warned of the impending flood; lamentably, no one heeded his warning. But we cannot say that God abandoned them or gave up on them.

We, too, are called to be prophets by virtue of our Baptism (see CCC 785, 1241). There won’t be another flood to destroy all life (Genesis 8:21–22), but the eternal consequences of unrepented evil are even more dire. The need for us to live our lives prophetically for the sake of those around us is just as urgent as the need for Noah to build the ark. Do we live our lives in such a way that they give testimony to God’s justice and mercy, even when the rest of the world doesn’t seem to care? Do our words and our actions bear witness to the eternal realities of heaven and hell, even when that faithfulness elicits mockery—or worse? May God give us the wisdom, the courage, and, above all, the charity to be prophets like Noah.

Alex holds a B.A. in History and Secondary Education from Colorado State University and an M.A. in Theology with an emphasis in Biblical Theology from the Augustine Institute. After ten years of teaching theology at Regis Jesuit High School, Alex recently moved to the Chesterton Academy of Our Lady of Victory where he teaches humanities and serves as Dean of Students. Alex and his lovely wife have five rambunctious saints-in-training. Between delving deeper into Scripture scholarship and reading about the saints, he maintains a love-hate relationship with home improvement projects.