Hit enter to search or ESC to close
CatechismLiturgical YearScripture

Should I Name My Guardian Angel? 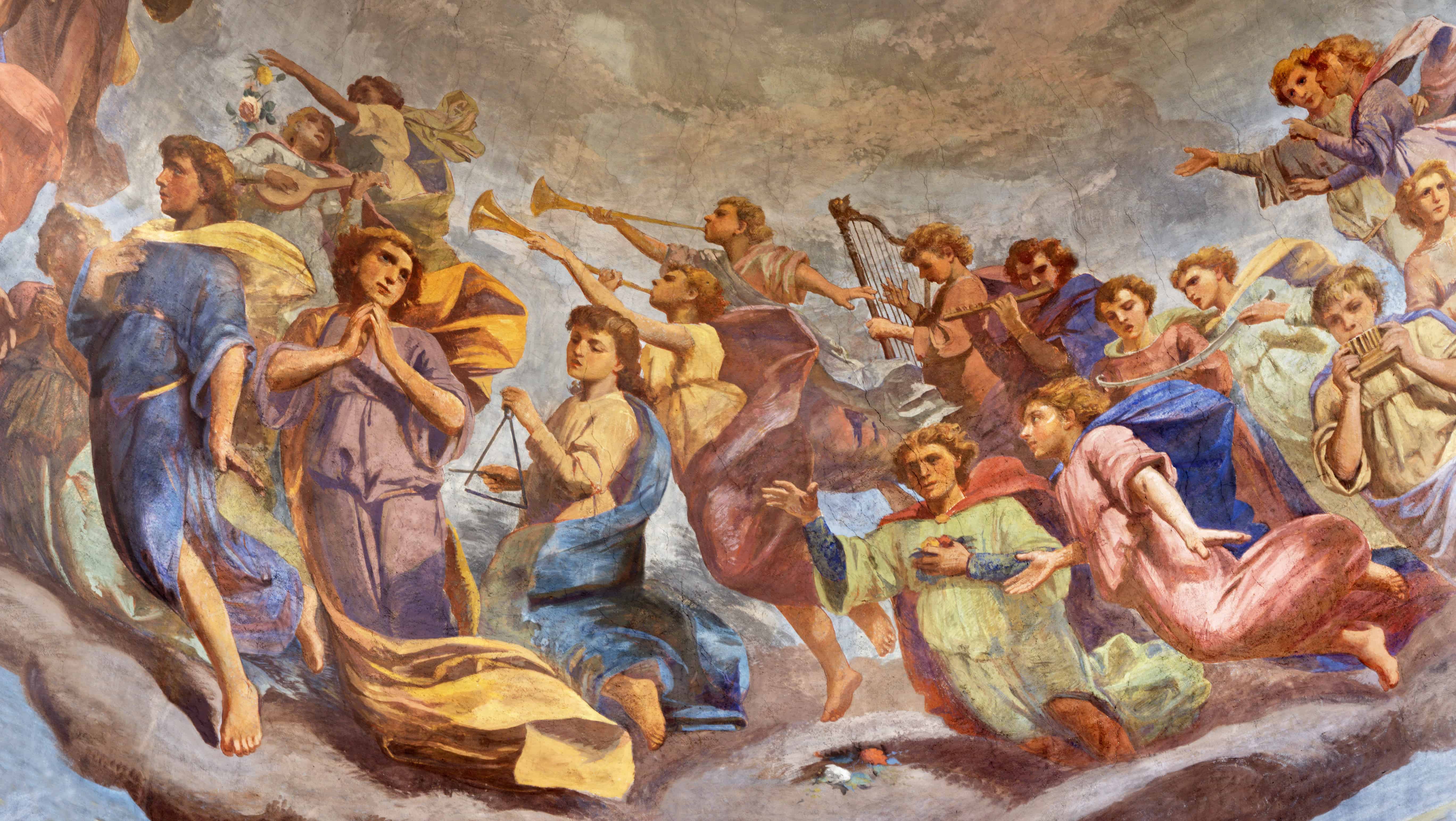 Image: Fresco of angels with the music instruments in cupola of the Basilica di San Prospero by C. Manicardi, G. Ferrari and A. Lugli (1884-1885)
Photo by Renáta Sedmáková / Adobe Stock

Tis the Season—for angels. September 29th is the feast of the Archangels (traditionally known as Michaelmas, literally “Michael’s Mass”), and October 2nd is the memorial of the Guardian Angels. Most of us are probably familiar with the Angele Dei:

Angel of God, my guardian dear,
to whom God’s love commits me here,
ever this day be at my side
to light and guard, to rule and guide.

If we’re not in the habit of saying this (or another) prayer invoking the help and protection of our guardian angel, now would be a good time to start!

The existence of angels and the idea that we each have our very own angel keeping watch over us are not merely pious traditions or nice thoughts—they are truths of the faith. The Church teaches definitively that there exist “spiritual, non-corporeal beings that Sacred Scripture usually calls ‘angels’” (CCC 328), that “the whole life of the Church benefits from the mysterious and powerful help of angels” (CCC 334), and that “beside each believer stands an angel as protector and shepherd leading him to life” (CCC 336, quoting St. Basil).

The word “angel” comes from the Greek angelos, which means “messenger.” Saint Augustine tells us that the title “angel” refers to the office, or mission, of these beings, and not to their nature. Their nature is spirit—they are personal, immortal, non-corporeal spirits with intelligence and will (CCC 329–330).

This means that angels are entirely other. We do not become angels when we die, although Scripture says that in heaven we will be equal to the angels (Luke 20:36). Whatever that equality may look like in eternity, it’s important to remember that in the order of creation angels are indescribably greater and more powerful than we are.

We see evidence of the awe-inspiring glory of the angels whenever angels appear to humans in the Old Testament. Consider the angels coming to rescue Lot in Genesis 19:1, or the pagan prophet Balaam encountering the angel in Numbers 22:31, or the righteous Daniel receiving the explanation of his vision from the angel Gabriel in Daniel 8:15–17. In each of these encounters—as well as many others—the recipient of the angel’s visit falls flat on his face in fear.

In the New Testament, however, we see evidence of a new, more familiar relationship between angels and humans. In Acts 8:26 an angel sends Philip to meet the Ethiopian eunuch. In Acts 12:6–17 an angel rescues Peter from prison, and when he goes to tell others of his release they assume it is “his angel” and not him (12:15). When Paul is caught in a storm at sea on his way to Rome, an angel appears to him to encourage him and tell him none of the crew of the ship will be lost (Acts 27:23–24).

While still awe-inspiring, there is the sense of a new closeness between men and angels. Through Christ we are now united in the service and worship of God. Nowhere is this reality more perfectly experienced than in the Church’s liturgy where “we share in a foretaste of that heavenly liturgy which is celebrated in the Holy City of Jerusalem toward which we journey as pilgrims… With all the warriors of the heavenly army we sing a hymn of glory to the Lord” for “it is in this eternal liturgy that the Spirit and the Church enable us to participate whenever we celebrate the mystery of salvation in the sacraments” (CCC 1090, 1139). So in addition to asking your guardian angel to keep you safe in rush hour traffic, it would be particularly appropriate to ask for his help in being attentive at Mass.

This devotion to the guardian angels is a very ancient tradition in the Church. Saint Ambrose said in the 4th century that “We should pray to the angels that are given to us as guardians.” Our angels “always behold the face of [the] Father who is in heaven” (Matthew 18:10) while also watching over us—they are tasked primarily with our spiritual well-being, although they very often provide physical help and protection as well.

To rule and guide

So we each have a guardian angel, and we want to make the most of this incredible companion God has assigned to help bring us safely to eternal happiness. Many people, out of a laudable desire to foster a closer relationship with their guardian angel, want to name their angel. It seems natural. After all, isn’t it easier to have a relationship with someone when we have a name by which to call them? But the Church strongly discourages this:

“The practice of assigning names to the Holy Angels should be discouraged, except in the cases of Gabriel, Raphael and Michael whose names are contained in Holy Scripture.” —Directory on Popular Piety and the Liturgy, 217

Why not name our angels? Quite simply, because they are not ours to name. Naming indicates a certain authority over another being. God gave man and woman dominion over creation, and so Adam named the animals (Genesis 1:28, 2:19). When Nebuchadnezzar conquered Jerusalem he removed King Jehoiachim from the throne and replaced him with Mattaniah, giving him the new name of Zedekiah both as a sign of his new position and as a reminder that Zedekiah was king only by the will of Nebuchadnezzar (see 2 Kings 24:10–17).

Parents—older and wiser, and in a position of authority—name their children. Owners—higher in the order of creation—name their pets. But “our” angels are nothing like our children or our pets. They are older and wiser than we, and they are above us in the order of created beings. We don’t have the authority to give them a name, or to change whatever name God has given them.

While we may not know the name of our guardian angels this side of heaven, we can be assured that we are known and loved by them. Furthermore, they are ready and willing to offer every assistance to ensure we join them before the throne of God. Let us eagerly submit ourselves to their care and guidance.