Transubstantiation in the Bread of Life Discourse (Part III)

By Daniel CampbellDecember 8, 2022No Comments 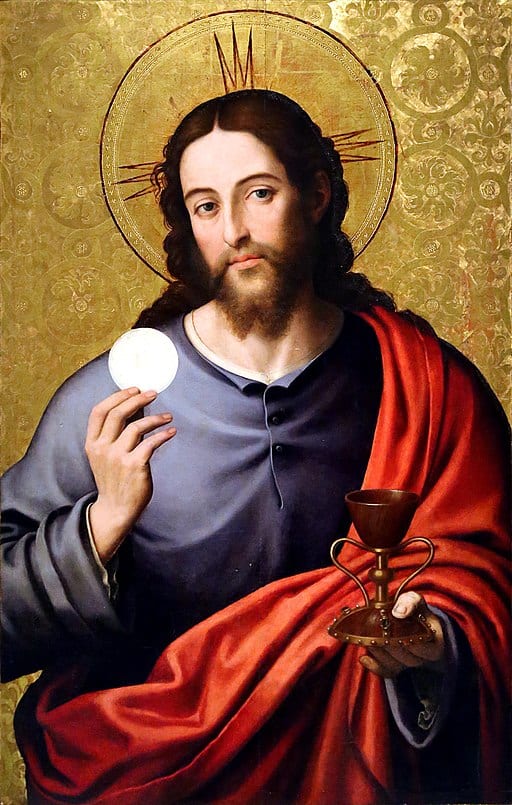 Transubstantiation in the Bread of Life Discourse (Part III)

As noted in my previous post, John 6 details a progression in three types of bread discussed by our Lord: the first being the wilderness manna, the second the bread from heaven corresponding to faith, and the third a future bread that Christ will provide. It is this future bread to which the doctrine of transubstantiation applies.

Shift to the Eucharist

It is debated whether John 6:51—“I am the living bread which came down from heaven; if any one eats of this bread, he will live for ever; and the bread which I shall give for the life of the world is My flesh”— marks the end of the discussion about the bread from heaven or the introduction of the future bread. Certainly it must be the start of Christ’s discussion of the Eucharist, the future bread, therefore signaling the turn in the discourse to transubstantiation.

Firstly, verse 51 parallels verse 35, which starts the discussion on the bread from heaven, though it speaks of the “living bread” rather than the “bread of life.” This marks a shift to focus on the Eucharist because it is both the first identification of a bread to come, and the identification of this bread as Christ’s flesh. Furthermore, if verse 51 is seen as the start of the discussion of the Eucharist, then verses 35-50 and 51-58 parallel, each having the same beginning, ending, and type of interrupting objection.

The Problem of Flesh

What happens next, then, after Christ’s turn to the Eucharist in 6:51? Verse 52 follows by recording the reaction of the Jews, asking “how can this man give us his flesh to eat?” The combination of verses 51b and 51c—”if any one eats of this bread, he will live for ever” (b); and “the bread which I shall give for the life of the world is My flesh” (c)—into one statement in their objection proves that the sticking point is the flesh language. In turn, verses 53-54 record Christ’s response, including both a negative (vv. 53—“unless”) and positive (vv. 54) exhortation to eat His flesh, as well as the introduction of blood to the discourse.

Verse 55 next records Christ reaffirming that His flesh is food, with verses 56-57 recording the ensuing relation between Christ and the one who consumes this food and drink. Verse 58 again reaffirms the supremacy of Christ’s new bread over its type, the wilderness manna (as discussed in the previous post), noting the transience of the manna compared to the Eucharist. Verse 60 records the reaction of the disciples and verses 61-65 Christ’s response. This chunk of text reveals deep opposition, with Christ recognizing such (vv. 61) and having the foreknowledge of faithlessness in the disciples (vv. 64-65). Lastly, verse 66 reveals the conclusive response of many disciples to leave Christ. This marks the end of the text under consideration as it marks the end of Christ’s interaction with the crowd, 6:67 then turning to a discussion with the apostles alone.

From Believing to Eating

Exegetically speaking, 6:51 is the first time that Christ refers to the Bread of Life as His flesh. The notion of flesh as gift recalls earlier revelations of the Word made flesh (John 1:14) and the Father’s love for the world (John 3:16). It also evokes the Crucifixion, wherein Christ offers His flesh in sacrifice. Relevant to transubstantiation are the Eucharistic allusions in the discourse’s shift from believing to eating. Despite being in agreement that the preceding text refers to faith, this shift is not something recognized by both Catholics and Protestants. As Nicholas Cardinal Wiseman writes:

“As far as the forty-eighth or fifty-first verse, Protestants and Catholics are equally agreed, it refers entirely to believing in Him. It is at one of the verses just mentioned, that we begin to differ most materially…the Catholic maintains that, at this point, a total, though natural change of subject takes place, and perfect transition is made from believing in Christ, to a real eating of His Body and drinking of His Blood, in the Sacrament of the Eucharist. The generality of Protestants maintain that no such transition takes place, but that our Savior really continues to discourse upon the same subject as before, that is, on faith.”

However, this Protestant failure to recognize Christ’s shift from discussing faith to the Eucharist neglects the significance for transubstantiation in the Greek words used in the text. The Catholic tradition recognizes this shift with the change of words that Christ uses with the Jews, who question His giving His flesh to eat (vv. 52). Prior to verse 54, esthio is the word used for “eating”, whereas Christ uses trogo there onwards. In total, esthio occurs 158 times in the New Testament, and it signifies the basic human act of eating. By contrast, trogo occurs six times and carries the more vivid usage of chewing or gnawing. Furthermore, in the cultural context, Greek literature used the word trogo to describe the feeding of animals, such as mules, pigs, and cattle. These two words unquestionably carry divergent connotations—esthio is used for normal human eating, while trogo is a more physical word describing the process of munching or crunching, often used for animals—both in Scripture and the greater culture of the day, which serves as one of the definitive proofs for transubstantiation in John 6, and which will be the subject that I begin with in my next post.