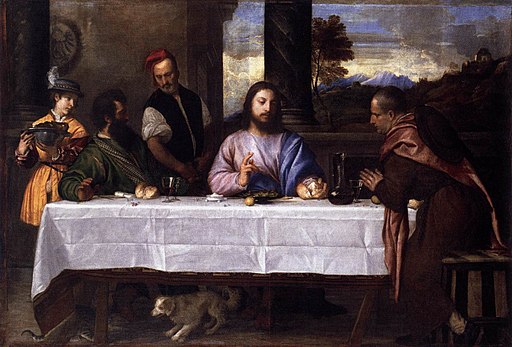 The encounter between the two disciples on the road to Emmaus with Jesus in Luke 24:13-35 is exciting and legendary. It’s probably one of my favorite Resurrection stories of the ten total appearances of Jesus narrated between all four gospels. One of the reasons I like it so much is because of the role that both Sacred Scripture and the Sacrament of the Eucharist played in their conversion.

We find the two disciples (one is named Cleopas—who was the brother of St. Joseph, according to Tradition—and the other is unnamed) leaving Jerusalem to return to their home in Emmaus on the very day of the Resurrection, which seems odd. Even though they had heard the testimony of the women who saw the resurrected Jesus that very morning (see Luke 24:1-12), they don’t believe and skip town, effectively turning their backs on the Church in Jerusalem.

On the journey, Jesus “draws near to them” (v. 15), but they don’t recognize him. There are a lot of reasons why they don’t, but the biggest is because they don’t have the “eyes to see.” In other words, they lost the sight of faith. Jesus would often say, “let him who has eyes to see, see.” This was an expression that invited his listeners to witness his extraordinary words and miraculous deeds with the eyes of faith and believe in him. The two disciples are, therefore, spiritually blind and cannot recognize Jesus even when he’s standing right there with them! We know this because they flat out tell Jesus, “We had hoped he was the one to redeem Israel” (v. 21). That verb is in the past tense! They no longer hope at all but have fallen into despair and disappointment, which is precisely why they walk away from it all.

At that moment, Jesus begins to teach them everything about himself in the Law and the Prophets (v. 27) during the long, seven mile walk to Emmaus. What a Bible study that would have been! Upon arriving at their home, Jesus “took the bread, blessed it, broke it, and gave it to them” (v.30), which is a biblical expression for the celebration of Holy Mass. Upon receiving the Eucharist “their eyes are opened and they recognized him” (v.31). Just as Jesus cured the physically blind and gave them sight, so too does Jesus now cure the spiritually blind and give them sight in order to recognize him with the eyes of faith. What a powerful, miraculous moment of transformation. They were dead in their unbelief, but now they are alive because of their belief!

After Jesus vanishes out of their sight, they reflect upon their time with him on the walk, “did not our hearts burn within us while he talked to us on the road, while he opened to us the Scriptures” (v. 32)? Notice that they have renewed faith because of both the study of the inspired Word of God and the reception of the Eucharistic Word of God. We need both Scriptures and the Sacraments to be cured of our spiritual blindness and recognize Jesus—who is undoubtedly standing there right next to us wherever we are journeying, but unfortunately sometimes we can’t see him.

As a result of this powerful conversion and renewed faith, they return to Jerusalem that same evening to share their story with the Apostles and the other disciples. It’s interesting that in the next Resurrection story in Luke 24:36-49, Jesus appears to his disciples and “opened their minds to understand the Scriptures” (v. 45). It seems pretty clear that Jesus thinks the Bible is important for understanding who He is!

You can probably understand why this story is so powerful. If we want to grow in our relationship with Jesus Christ, we must not only receive the Sacraments in a faithful manner, but we must also study the inspired Word of God and recognize that all of Scripture points to the mysteries of Jesus Christ. As the Easter season comes to a close soon and we prepare to celebrate Pentecost, let us pray to the Holy Spirit for a renewed desire to study the Scriptures and recognize Jesus!