Hit enter to search or ESC to close
ApologeticsCatechismLiturgical YearScripture

He Descended into Hell 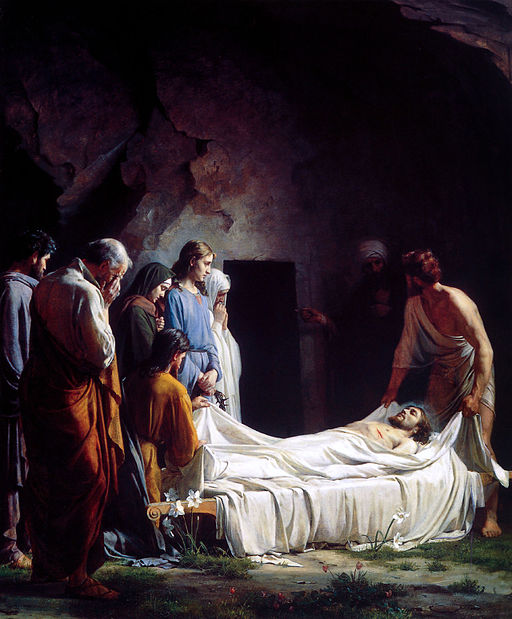 On this most solemn and somber day, we commemorate our Lord’s Passion and Death. St. John’s account of the Passion, which the Church reads in her liturgy every Good Friday, ends:

“They took the body of Jesus and bound it with burial cloths along with the spices, according to the Jewish burial custom. Now in the place where he had been crucified there was a garden, and in the garden a new tomb, in which no one had yet been buried. So they laid Jesus there because of the Jewish preparation day; for the tomb was close by.” —John 19:40-42

We know, of course, that this is not the end of the story, and we look forward to the celebration of his glorious Resurrection from the dead on Easter. But in the meantime there is still one more day to wait: Holy Saturday.

Growing up, Holy Saturday always felt like a strange in-between time to me. It’s not technically Lent any more, but it’s not yet Easter. But I have learned that the Church does nothing without a reason—and if the Church has a reason for the timing of every liturgy, then even more so Jesus had a particular reason for each of his actions. To more fully enter into the mysteries of the Paschal Triduum and so more fully experience the joy of Easter, we need to understand what Jesus was doing between his Death and Resurrection. Our Lord’s actions on Holy Saturday will help us to know how to observe this holy day in its own right and not simply rush through it on our way to Easter.

The most obvious answer to “what was Jesus doing on Holy Saturday?” is that he was dead. He  was really and truly dead, his soul separated from his body. His dead body was anointed with spices, wrapped in a burial cloth, and buried in a new tomb which was close at hand—all in a rush late Friday afternoon before the Sabbath began at sundown (see John 19:31-42).

Why did Jesus spend a whole day in the tomb before his Resurrection? He was fulfilling the Sabbath. God rested on the seventh day of creation, consecrating the Sabbath as holy and setting it aside as a day of rest and worship for his covenant people. Now, after declaring “It is finished” and giving up his spirit (John 19:30), Jesus rests in death on the Sabbath—fulfilling the old Law and the Sabbath of the first creation before rising from the dead on the first day of the week, the first day of the New Creation (John 20:1).

Jesus fulfilled the Sabbath as his body rested in the tomb on Holy Saturday, but what happened to his soul while it was separated from his body in death? Just as Jesus frequently healed on the Sabbath (see John 5 and 9, for example) citing the reason that he must do the work of his Father (John 5:17), on this Sabbath Jesus is also working: “as the Father raises the dead and gives them life, so also the Son gives life to whom he will” (John 5:21).

The Gospels do not record the work that Jesus did on Holy Saturday, but St. Paul references it in Ephesians 4:8–9: “Therefore it is said, ‘When he ascended on high he led a host of captives, and he gave gifts to men.’ (In saying, ‘He ascended,’ what does it mean but that he had also descended into the lower parts of the earth.)” St. Peter also refers to it in 1 Peter 3:19: “he went and preached to the spirits in prison” and 4:6: “the gospel was preached even to the dead.”

This is the first part of the fifth article of the Apostles Creed: “He descended into Hell.” Although the words of the Creed are familiar to us, the doctrine still strikes many as strange. What do we mean when we proclaim that Jesus descended into Hell?

The Latin of the Creed is literally “to the dead” (ad inferna or ad inferos), not “to Hell/the inferno” (ad infernum). This language parallels the Greek Hades and the Hebrew Sheol, the names for the place of the dead in Scripture—which is not necessarily the place of the suffering of the damned. This place of the dead is also the “bosom of Abraham” from the parable of Lazarus and the rich man (see Luke 16:22), and it is also sometimes referred to as the “Limbo of the Fathers.” So these words in the Creed refer not to the “hell of the damned”—the place where Satan and his rebel angels are banished, and where all those who ultimately reject God suffer eternal separation from Him—but to the realm of the just who had died before Christ.

Jesus descended into hell to “free the just who had gone before him” (CCC 633). When Adam and Eve sinned, the gates of Paradise were closed to mankind—not only Eden, but Heaven also. Jesus opens the gates of Heaven by his Paschal sacrifice, and on Holy Saturday he descends to the realm of the dead “in his human soul united to his divine person” to proclaim the good news of his victory over sin and death to the faithful who have died so that “the dead will hear the voice of the Son of God, and those who hear will live” (CCC 637; John 5:25).

In the realm of the dead were men and women from every time and people. Just as the saving work of Christ’s Paschal sacrifice is made efficacious in us through the sacraments, that saving work was applied to those who had already died in friendship with God. Jesus’ descent into hell is “the last phase of Jesus’ messianic mission, a phase which is condensed in time but vast in its real significance: the spread of Christ’s redemptive work to all men of all times and all places” (CCC 634).

“Today a great silence reigns on earth, a great silence and great stillness. A great silence because the King is asleep. The earth trembled and is still because God has fallen asleep in the flesh and he has raised up all who have slept ever since the world began… He has gone to search for Adam, our first father, as for a lost sheep” (quoted in CCC 635).

Holy Saturday is a day of stillness and waiting. On Thursday Jesus invited us to keep watch with him in his agony. Today we mourn our sins at the foot of the Cross. This Holy Saturday—in the midst of whatever else we might have to attend to—let us seek to keep the stillness of the tomb in our hearts and in that silence to ponder the glorious proclamation of Christ’s victory to the righteous dead, so that we may celebrate the Resurrection, the “crowning truth of our faith,” with even greater joy (CCC 638).