The Hospitality of Abraham and the Anger of the World 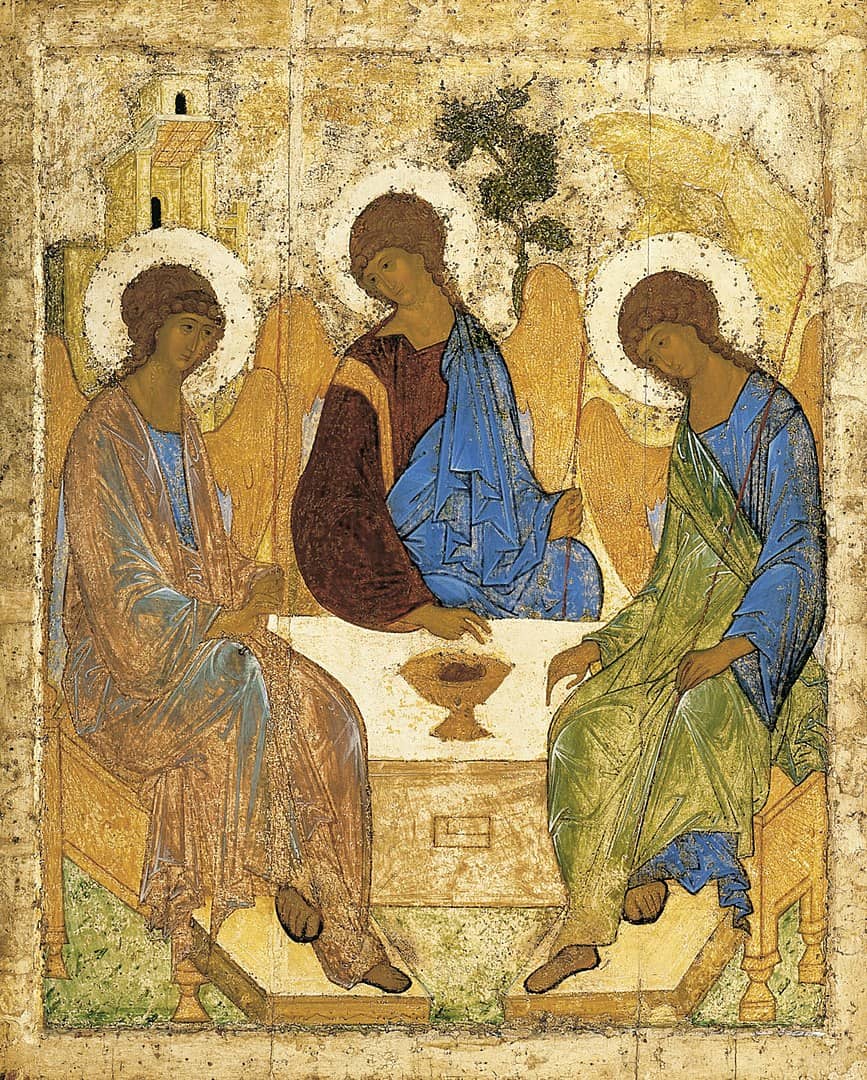 Image:  The Trinity / The Hospitality of Abraham by Andrei Rublev [Public Domain]

Our Lord tells us “Seek ye therefore first the kingdom of God, and his justice, and all these things shall be added unto you” (Matthew 6:33). How do we understand this command in the context of Catholic Social Teaching, of which Leo XIII tells us “in regard to things temporal, [the Catholic Church] is the source of benefits as manifold and great as if the chief end of her existence were to ensure the prospering of our earthly life” (Immortale Dei 1)? How do we benefit our neighbors without forgetting that “we have not here a lasting city, but we seek one that is to come” (Hebrews 3:14)? Perhaps the answer lies in the prayer the Lord Himself gave us.

The language of the Lord’s Prayer is deeply eschatological. That is, the things for which we ask in the Our Father are principally concerned with the end of the world. The sanctification of the Divine Name will be accomplished in the blood of the martyrs immediately before the kingdom of God breaks into history, and God’s will will finally reign on earth as it does in heaven, for the two will be one. The “daily bread” is, in fact, the manna or “bread of the morrow” which sustains us in persecution. The remission of our debts and our remission of those of our debtors is the precondition of acquittal in the Last Judgment. The temptation into which we ask not to be led is the final trial, and the “evil” from which we ask to be delivered is the enemy of mankind and the persecution to which he will subject the faithful before the end.

The Lord’s Prayer is so familiar to us and seems so uncontroversial and “ecumenical” that suddenly to recognize its dramatic particularity and specifically Christian and apocalyptic character is jarring and unsettling. It seems suddenly alien and strange, even less relevant and useful, as we so often assume that we do not live on the edge of the final tribulation. But the truth is that we all live on the edge of those tribulations at every moment. St Augustine said that if all Christians embraced consecrated chastity the number of the elect would be made up and completed in one generation. The Catechism teaches that “the glorious Messiah’s coming is suspended at every moment of history until his recognition by all Israel” (CCC 674). Insofar as we allow ourselves to be reformed into the image of Christ, so do the world, the flesh and the devil rise up, and the conditions of the last days are realized around us.

St Louis de Montfort said, “The Our Father contains all the duties we owe to God, the acts of all the virtues and the petitions for all our spiritual and corporal needs.” As soon as Our Lord was manifested as the Eternal Son in his baptism in the Jordan, “the Spirit immediately drove him out into the wilderness” where he was tempted by Satan (Mark 1:12). When we assert our adoptive participation in that Sonship in the Lord’s Prayer, we too are driven into the wilderness, we are tested, and the angels minister to us.

Our Lord compared the times in which the end shall come to the days of Noah and the days of Lot. We are perhaps more familiar with the metaphor of the Ark for the Church. There was “at the time of the deluge only one ark of Noah, prefiguring the one Church, which ark, having been finished to a single cubit, had only one pilot and guide, i.e., Noah, and we read that, outside of this ark, all that subsisted on the earth was destroyed” (Pope Boniface VIII). Indeed, the figure of the dove which would one day manifest the Spirit at the Lord’s baptism first appears in the context of the Flood. Yet the greatest manifestation of the Trinitarian nature of God in the Old Testament came in the context of Lot’s deliverance from Sodom.

In a great turning point of salvation history, the Lord manifests Himself to Abraham as three men (angels) whom our father in the faith, in some way perceiving the mystery, addresses in the singular. They come to tell him that Sarah will bear a son, Isaac, through whom the promises made at Abraham’s call will one day be fulfilled. That is, through him the Messiah Himself will one day be born.

But then God reveals to Abraham that the terrible sins of Sodom have called out to Him for vengeance, and He intends utterly to destroy the doomed city. First, however, he will rescue from it Abraham’s kin.

Here is a metaphor for the whole of salvation history, for what are Christians but the spiritual kin of Abraham? What is the world around us but a damned city, an unholy land in which the faithful are on pilgrimage? What pleads for our salvation before the Father but the flesh and blood descendant of Abraham nailed to the Cross? Who delivers us from the doomed city but the Son and the Spirit sent into the world “to gather into one the scattered children of God” (John 11:52)? Do we not hear the very tones of our contemporaries, outraged at the Church’s witness to the sanctity of life and marriage and the passing nature of their world, in the angry words of the Sodomites: “This fellow came to sojourn, and he would play the judge! Now we will deal worse with you than with them” (Genesis 19:9)?

The manner of Sodom’s destruction anticipates the end of all things, for when the Lord comes again He will judge the world in fire. The rainbow reminds us not just that God will never again destroy the world in a flood, but also that it will one day perish in the flames of His wrath (see 2 Peter 3). Every time we see that symbol we must remember that fact.

Like Abraham “those who keep the commandments of God and bear testimony to Jesus” (Revelation 14:12) should plead for the people of the doomed city but, surely, we should not like Lot offer up our children in sacrifice to the consuming vices of the mob. We must never forget that by our adoption we are made strangers and sojourners in this world who must neither tarry nor look behind in our journey home.

“And I heard another voice from heaven, saying: Go out from her, my people; that you be not partakers of her sins, and that you receive not of her plagues. For her sins have reached unto heaven, and the Lord hath remembered her iniquities.” —Revelation 18:4-5

Dr. Alan Fimister is Assistant Professor at St. John Vianney Theological Seminary in the Archdiocese of Denver, where he teaches the theology of St. Thomas Aquinas, Catholic Social Teaching, and Church History. He received an MA in History in 1997 from Oxford University, an MA in Philosophy & Theology in 1998 from Oxford University, an STM in Theology in 2002 from the International Theological Institute in Austria, a PhD in History in 2007 from Aberdeen University, a GDL in Law in 2008 from Northumbria University, and an STL in Theology in 2014 from the International Theological Institute in Austria. He is also Founder and Director of the Dialogos Institute, a Romano-Byzantine theological institute devoted to the study of the patristic heritage in the spirit of Latin and Byzantine Thomism. He has published on European Political History and Thomistic Political Philosophy, including his most recent work on Catholic Social Teaching entitled, Integralism: A Manual of Political Philosophy. Alan, his wife and two daughters reside in the greater Denver area.